Last year, I spent a few weeks of the summer in Cambridge. Amongst other things, it was a great opportunity to hang out in Makespace with my good friend Michael and continue working on my Anytime ⨉ Nixie project–the Nixie tube-based world clock I’m building.

Since Michael currently spends his time creating electric guitars, he’s a great person to turn to to create a beautiful case for the clock, and we had a lot of fun doing just that: in under two weeks, we produced a number of PLA prototypes, CNC’d the main body of the case, laser-cut a base, and printed some custom feet. You can find Michael’s notes on the process here, and here. In my previous posts covering the clock, I described the process of designing and building the electronics, and creating the firmware to control the Nixie tubes. In this post, I’ll focus on designing and assembling the case:

Michael kicked things off by using Fusion 360 to produce some designs for the case–you can export PCBs directly from EagleCAD into Fusion 360, so we were able to try everything in place without creating a single part. I’d never used multiple components in Fusion before this, so it was a great learning opportunity. Once we had something we were happy with, we set about printing, testing, and revising the design. 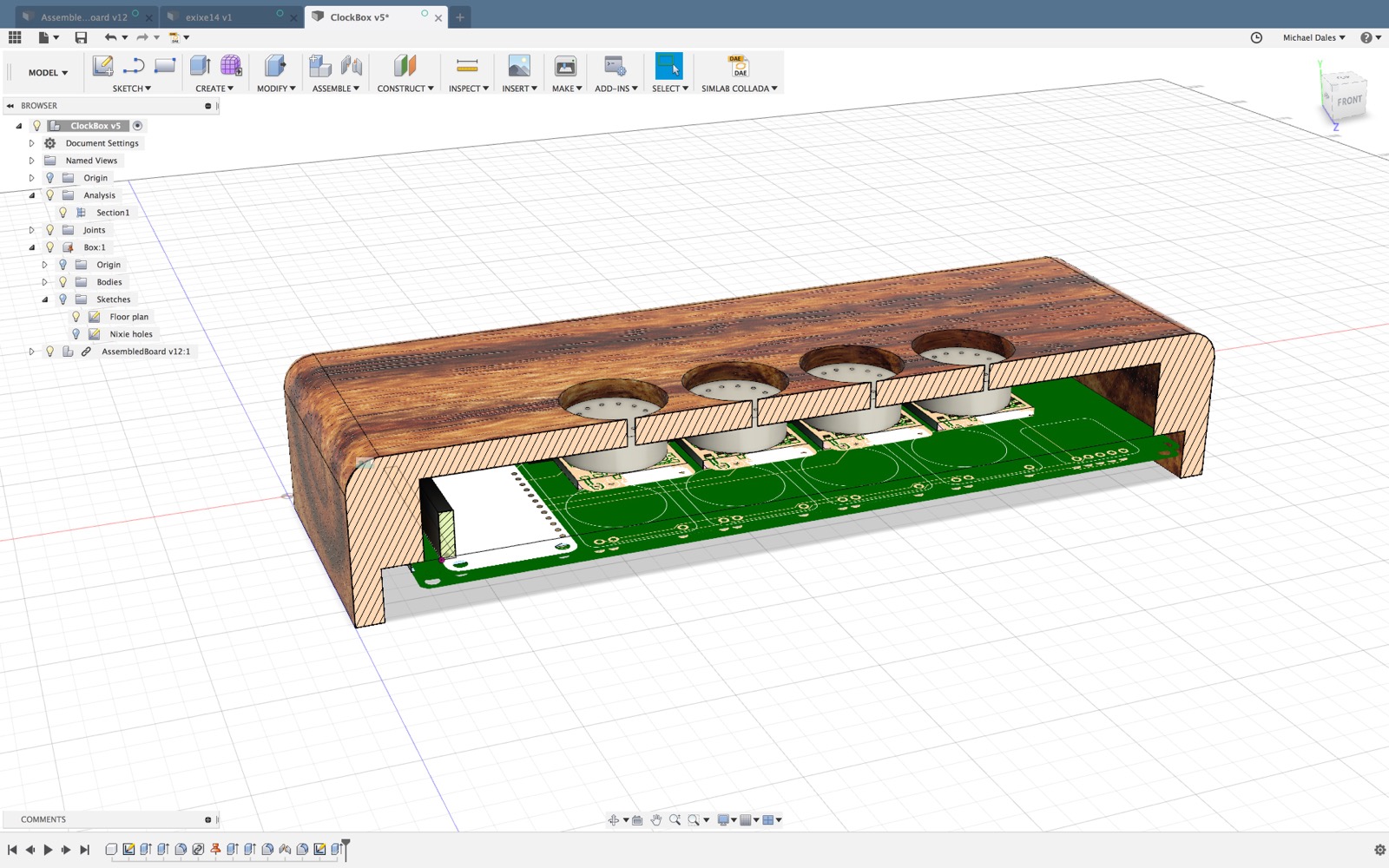 We made use of Makespace’s Ultimaker 3 extrusion printers for our prototypes, printing in PLA. These are quick and fairly reliable; ideal for rapid iterations. We did encounter a number of printer failures during the process–a snag in the PLA spool killed our first print, and the unusually hot British summer caused a number of prints to deform a little–but after a few days, we’d seen enough to have confidence in the design. Making the most of a failed print to test some dimensions

We ultimately went through a number of variants of the case, tweaking clearances, adding a cut-out for the USB port that will power the clock, and adding air vents to ensure things don’t overheat. Rear of the clock, complete with USB port and vents

Testing the design on the CNC router

Having decided we were happy with the overall design, we next set about figuring out how to cut it out of wood using the CNC router. This is more complex than the extrusion printer, requiring multiple phases, with tool changes in between, and flipping the material in the process.

To convince ourselves we had everything planned correctly–and to avoid wasting our chosen wood–we glued a few layers of MDF together and tested with this. Happily we got most things right the first time around, and using the MDF allowed us understand just how careful we needed to be when drilling out the rear vents. For the final case, I picked up two blocks of wood–Wenge and Wild Olivewood–from Exotic Hardwoods UK Ltd, ultimately selecting the olivewood. We found ourselves with a block of wood significantly larger than necessary, so I should be able to get a number of clock cases (or other projects) out of it.

We repeated the CNC steps we’d practised on the MDF and, fortunately, everything went according to plan, leaving us with a beautiful box. It’s really a true pleasure to work with natural materials like wood–the texture and grain brings so much to a simple design. Using a CNC router, there’s more finishing required than a simple extrusion print: if you look closely in the above image, you can still see the tabs that the router leaves in place to connect it to the main block so it doesn’t move around during cutting. These needed removing manually as part of the finishing process. We were also unable to drill the rear vent holes using the router as they’re perpendicular to the body of the case, so we did that manually, placing a support block inside the case, and using a pillar drill along with a laser-cut guide: 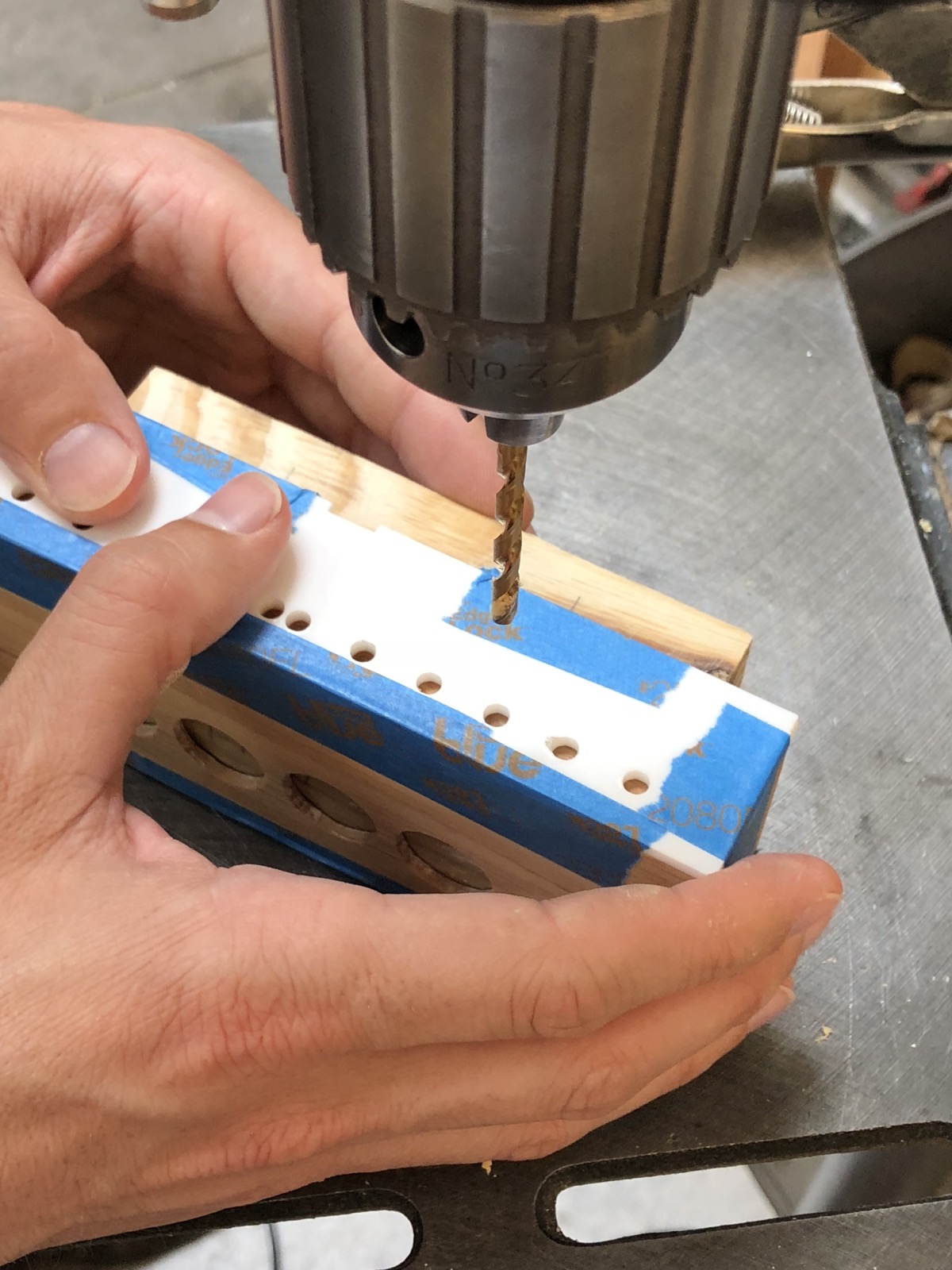 We then continued the finishing process by sanding the box. This involves working through gradually higher and higher grit sandpaper until the wood has almost a silken plastic-like quality. It’s amazing how different it both looks and feels after this process. 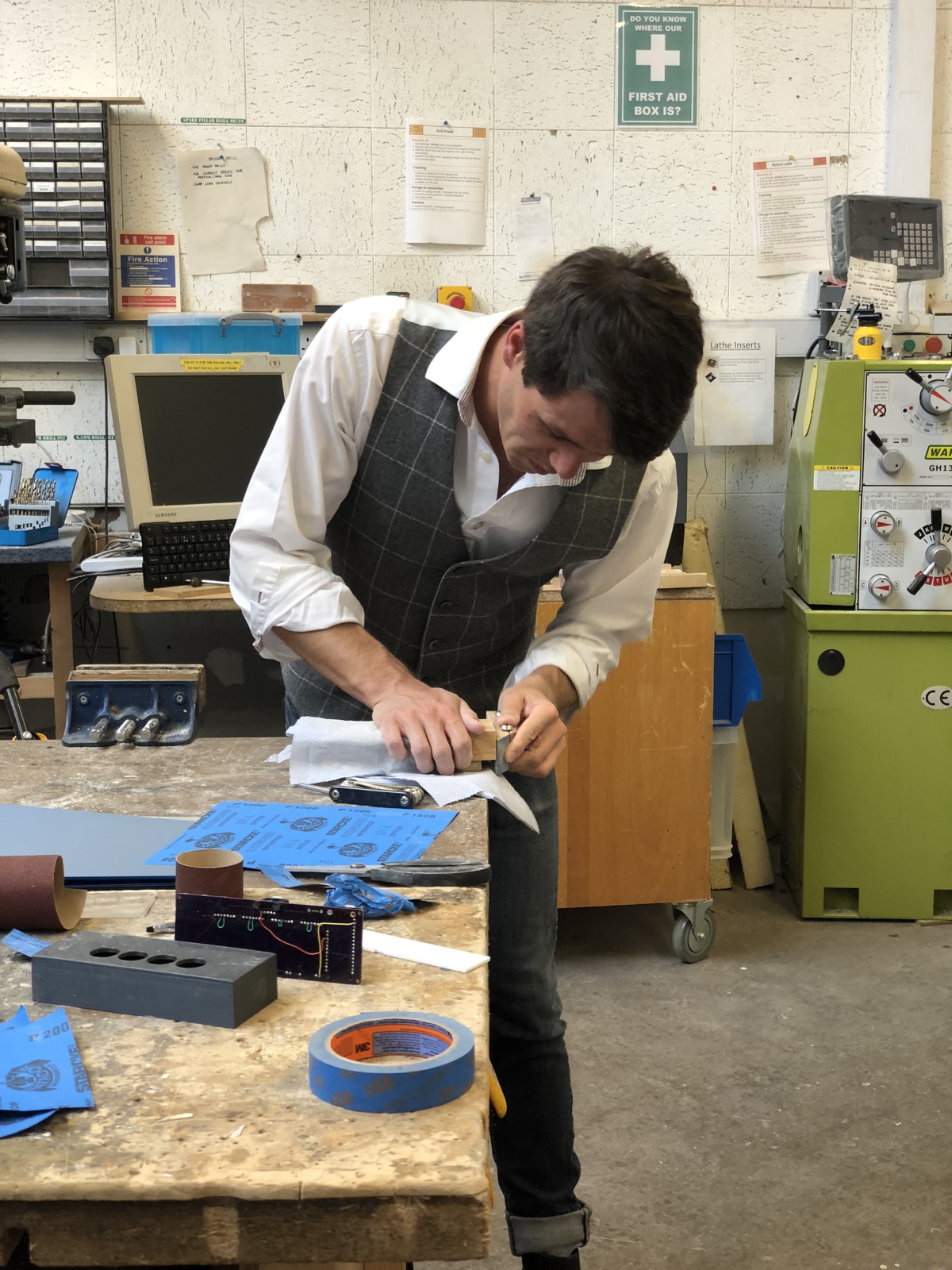 Since it’s a time consuming process, we spaced the sanding out over the course of a few days but, during this time, were surprised to discover the case shirking. Wood requires seasoning (slowly drying, during which time it shrinks as the moisture content reduces) prior to working with it, and I had unwittingly purchased unseasoned wood. 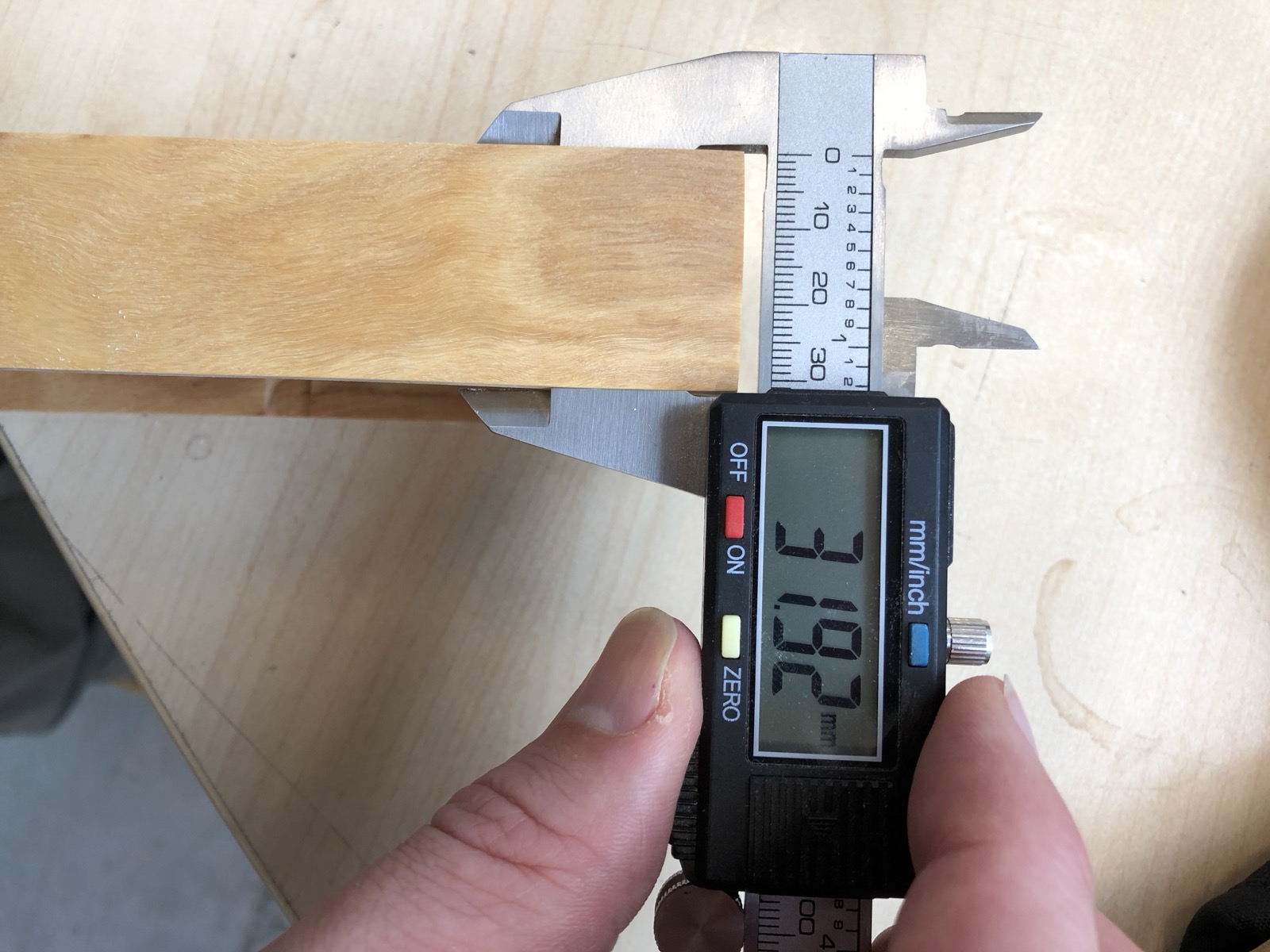 Keeping an eye on the shrinkage

Fortunately, our plan had always been to finish the case with Crimson Guitars‘ finishing oil, so we quickly started this process in the hope that it would cause the wood to expand a little, while also serving to reseal it. After a few coats, the base stopped shrinking and, thankfully, everything still fitted. In the future, we’ll experiment with initially cutting away just some of the wood and leaving it to dry before cutting the details in the hope of avoiding this issue. Letting the base dry in between coats of oil

Many people have contributed to Anytime, and I wanted to acknowledge that so, following in the tradition of the first Mac, I thought it would be nice to include the signatures of the people I’ve had the pleasure of working with on this project: Michael, Michi, Pavlos, and Anna. Having received my Makespace laser training, I opted to laser cut the base out of clear acrylic, complete with everyone’s signatures: Once installed, the clear acrylic shows off the circuit board inside–complete with a few hardware bug-fixes: Since we want to allow air to flow through the clock–in through gaps to the sides of the base, and up through the holes at the rear–it’s necessary to raise the case up slightly with some feet. This has the nice aesthetic effect of making it look like it’s floating.

As with everything in this project, we designed our own, modelling them in Fusion 360, and then printing them, this time using the Form 1 resin printer. The Form 1 can produce parts at an almost unbelievable resolution when you’ve become used to the limitations of an extrusion printer like the Ultimaker, but it can be slow and finicky. We tried a few prints, on both the Form 1 and the Ultimaker, but ultimately a collection of imperfections caused me to turn to Shapeways for the final print: 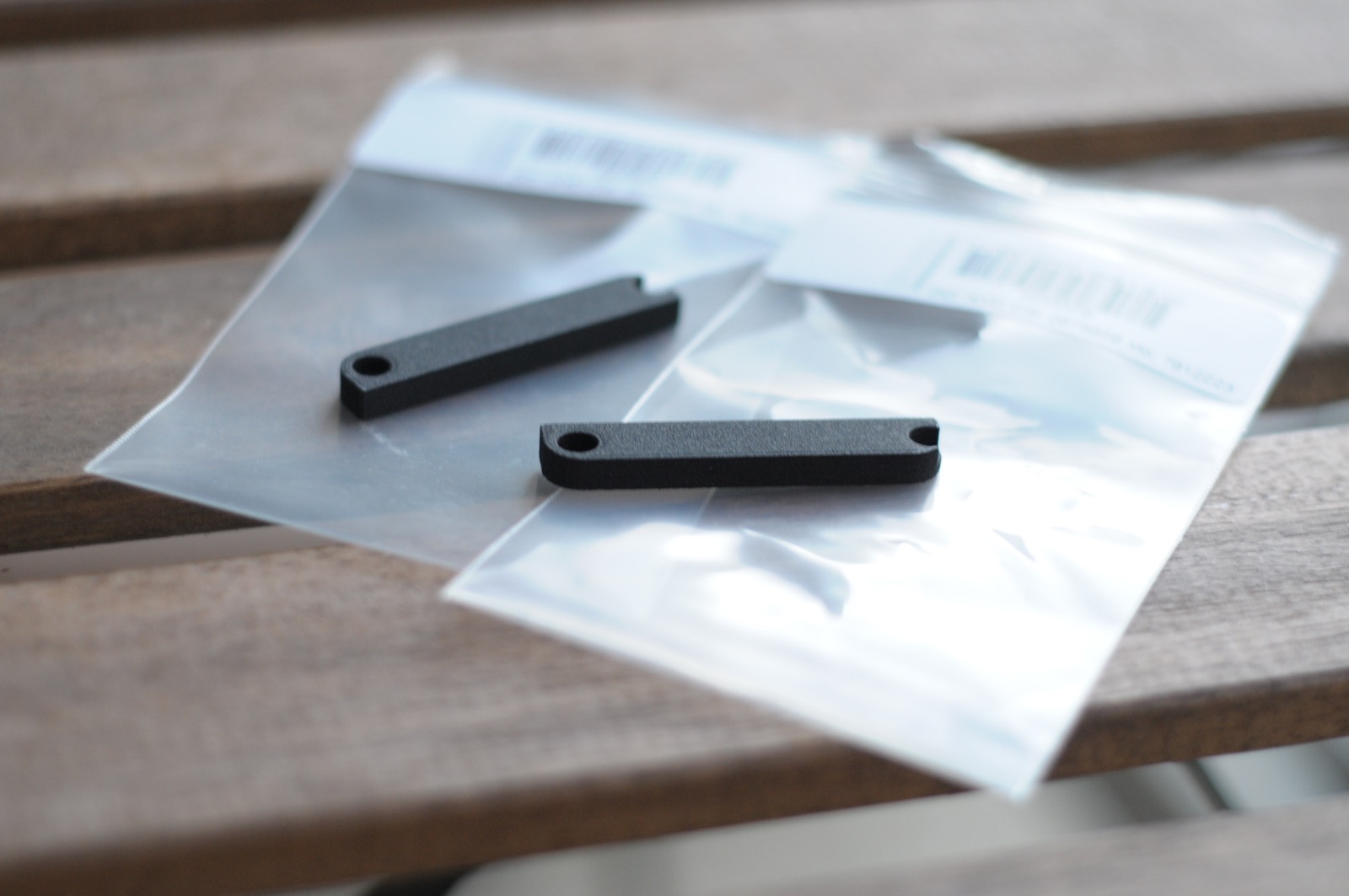 While we didn’t quite manage to pull everything together before I had to return to California, we came mighty close. Since then, I’ve assembled all the parts–including the Shapeways feet–and the clock sits in pride-of-place in my apartment. Next, I’ll be improving the software, and producing a few more clocks.

I would like to extend a big thank you to Makespace–especially Jonathan and Michael–for allowing me to join for such a short period of time and for making me feel so welcome. I can’t wait for my next sabbatical.