As I am currently residing in China, I tend to try to hold my tongue – at least on the internet – when it comes to Chinese politics. Politics which, so oft, gives me what might be described as “The Willies”.

I must allow myself one miner digression, however, to highlight the irony in CCTV – a Chinese TV news network – showing people protesting about the reliability of BBC news coverage, whilst CCTV’s own record in such matters is somewhat… interesting: 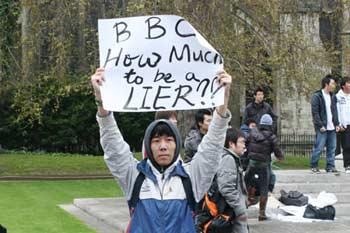 Now, after much thought (and a regular changing of the mind), I am of the opinion that Beijing should certainly be given the oportunity to host the Olympics and we – in the rest of the World – must embrace China. China should be given every chance possible to continue to prosper [though perhaps it is arrogant to assume we have much choice in the matter now].

However, as part of this, it is time for the establishment to realise that, as China takes an ever increasingly prominent role on the World-stage, even its internal politics will come under greater scrutiny. The traditional solution of smoke-and-mirrors will no longer suffice.

As a side-note, I’m interested to see if my digression gets my website blocked by the Great Firewall or not.

Update: Thanks go to Mike, my self-appointed editor, for his re-wording of paragraph 2.

Interesting perspective Jason, and one which I think you are qualified to give. I believe however that the issues related with the Beijing Olympics and in particular the protests taking place are those of which are attributed to a governance which most of Europe has come out from in the last 60 years, and certainly the baltic and ex-soviet states in the last 20. There is an identification with the issues, very much still raw with some communities about one country can essentially “bully” another into submission. China is still not known to many “outsiders”. I include myself in that, and I share the belief that it should be allowed to host the olympics. But the longer it’s communications with the outside world are muted, the more damage it’s reputation faces, and more misunderstood the nation becomes.