At 4.30 p.m. on Friday 19th November 2004, I joined the back of a short queue of 40-or-so people waiting outside 235 Regent Street. On Saturday 20th November 2004, I was near the front of a 2000-strong queue, at the opening of the Apple’s flagship London Store – It’s essential to do the odd mad thing in one’s life and waiting outside of the first ever Apple Store in London was one of mine.

I was fortunate enough to find a few people mad enough to join me in my quest - Tom Sutcliffe, David Mery and Gleb Dolgich from Symbian and Keith Chan, his Brother and Cousin. Base camp was situated just off Regent Street, around the corner from the Apple Store and consisted off 6-or-so £5 fold out chairs from Lillywhites.

The evening must be one of the most surreal that I have ever spent; a sort of 60s computer fest, with people using their laptops as repeaters to bounce the WiFi connection provided by the Apple Store down the queue and the occasional ritualistic burning of PC hardware.

The two pairs of jeans, three fleeces, coat, scarf, gloves and hat did a fairly job of keeping me warm but the coffee and food rations provided by Sabzi (‘Think Different, Think Sabzi’) proved vital for survival – the owner managed to stay open until mid-night and open at 8 the following morning allowing us to make use of his facilities. The rest of the time, we had to rely on questionable outdoor facilities and the entrance to the tube station to keep us warm! There seems to be no shortage of photographs of the event and, even though we didn’t take too many ourselves, we seem to crop up on other people’s photos around the web. While this one makes it look like we were the very front of the queue we weren’t quite that dedicated! I’m the one wearing the blue cap right at the very front; David is to my left and has a dark grey wooly hat on; and Tom is wearing the white coat. All the people you can see inside the store are Apple employees and, on entering, they cheered and applauded us as the new U2 single Vertigo that Apple has been using in it’s advertising played in the background. Looking back, it feels like a slightly cheesy American-style marketing ploy but it was extremely effective (especially having had only 30 minutes sleep!) – all of us feeling over-awed by the whole event.

Amazingly, we even managed to get onto the official Apple publicity shots… Admittedly we aren’t that obvious, but we are there – You can just make out my blue cap at the very front of the photo, with Tom and David a little further back: 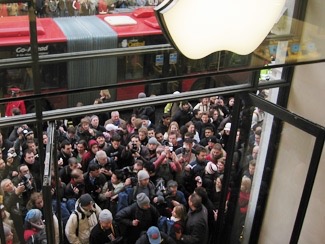 Yet another photo I found on the web shows Tom sporting his ‘Moof’ t-shirt while queueing (yet again…) to buy Lucky Bag… (If you still can’t make him out; he’s the one right in the middle of the shot with the white t-shirt and two blue things slung over his shoulder.) A few people have asked me what incentive there was to spend 17 ½ hours waiting in the bitter cold of a London winter outside a computer shop. While I did for the experience, I must acknowledge that the Apple Lucky Bag offer did provide a little bit of encouragement: Apple were only offering 300 of these bags which, priced at £250, were guranteed to contain over £705 worth of Apple gear – not a bad deal for an over-enthusiastic Apple user!